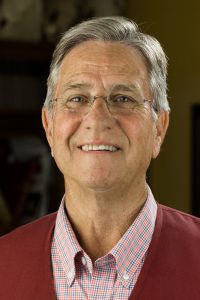 Dr. Ward is a Nacogdoches native and grew up on a family-owned dairy. He graduated from Nacogdoches High School in 1963 and began his pursuit of a veterinary career by attending Texas A&M University. He received his Doctorate of Veterinary Medicine in 1969 and after short periods in Mesa, Arizona and Pasadena, Texas he returned to Nacogdoches and started North Street Veterinary Clinic. He continued his education in 1973 by studying embryo transfer at the University of Cambridge. In 1982, Dr. Ward and his brother, Dr. Jim Ward, opened Ward Animal Hospital.

Since then he has been a well-respected permanent fixture in the Nacogdoches community where he served on the NISD Board of Trustees for 6 years. He has been married to his high school sweetheart, Mary Jane, for over 50 years, has 2 daughters, and 3 grandchildren. He is a member of AVMA, TVMA, and AABP. When he is not at the clinic, he enjoys working on the family farm, woodworking, restoring old cars, and being a grand-dad.